“Music is incredible here. We can join the orchestra, choir or a band, or all three!”

Winterfold has a hugely diverse music department which allows children to develop their skills and perform a dazzling array of different styles and genres.

Our choirs perform both in school and at external venues and have been on tours to Barcelona, Prague and South Africa.  They have even sung Mass at St.Peter’s in Rome and at the Pantheon. There is a selected Chamber Choir, which sings sacred repertoire and leads the Carol Service, plus a Parents’ Choir who sing alto, tenor and bass at school concerts. Performances have included ‘Adiemus’ by Karl Jenkins, Faure’s Requiem, ‘Phantom of the Opera’ and ‘Les Miserables’.  Our Vocal Soirées see a large number of soloists and the award winning Girls’ Harmony Choir perform to a packed Performing Arts Centre, with songs ranging from W.H Anderson’s Omens of Spring to For Good from the musical Wicked. At the last Dudley Music Festival, Winterfold really brought home the silverware, winning an incredible thirteen trophies. This is a very prestigious competition and to get such success was incredible. The Chamber Choir won their class and the Girls’ Harmony Choir achieved almost 90%.

Our senior jazz band, ‘The Groove Diggers’, has developed an excellent reputation and is much sought after for external concerts and events.  This was confirmed recently by invitations from the Mayor of Kidderminster to perform at his Mayor Making Ceremony and subsequent Mayor’s Ball at Kidderminster Town Hall.  The Groove Diggers have also received a series of invitations from Chawn Hill Church in Stourbridge to perform at high profile events in the town.  It is so great to take Winterfold Music out to the Public. The band has also appeared at the Upton Jazz Festival, entered the National Youth Music Festival and recorded a CD at the Metropolis Studios in London. They have won the ‘National Jazz Partnership Award’ and performed at Symphony Hall and the Royal Albert Hall in London.  Half of the County Jazz Orchestra, known as ‘WYJO’, is made up of current and ex-Winterfold pupils. 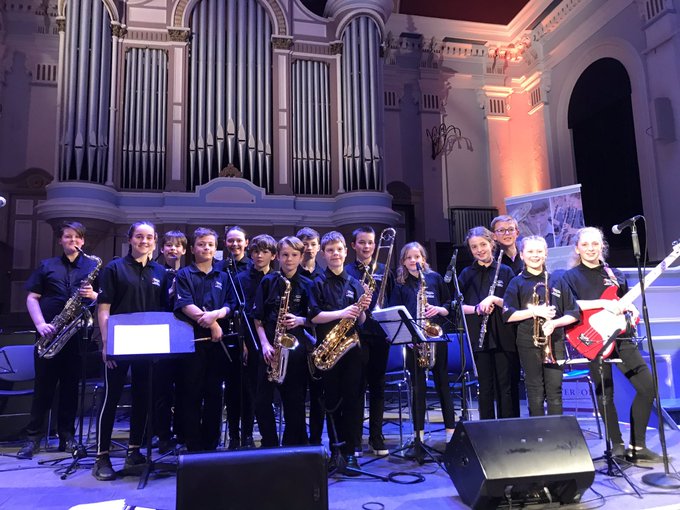 Where we have played

For a small school, we have played in an amazing range of venues across the county and the globe. These are all venues where Winterfold soloists, ensembles and choirs have performed over the last fifteen years.

Our annual Music Competition gives every young musician the chance to show what he or she can do and there are separate classes for each section of the orchestra. There are also regular Platform Performance concerts with solo and ensemble performances. Our pupils sit an average of one hundred ABRSM and Rock School instrumental exams each year. Eleanor W was our first pupil to receive the Winterfold Music Award, an honour which is now on offer to future generations.

We also have ‘Mini Me’ concerts in the front hall of the School, using the wonderful grand piano and acoustics. At least twice a term, there are musical coffee mornings, where parents can relax whilst being serenaded by chamber music.

Our Performing Arts Centre, opened by HRH The Earl of Wessex, is the perfect venue for such concerts and performances. We feel that it is particularly important that those who play and sing should also hear and enjoy good ‘live’ music so we regularly attend local concerts and play host to visiting musicians, including strong links with a Ugandan Choir.

Most exciting of all for Winterfold Music is the fact that every child in the School, from KG2 to Year 8 has the opportunity to perform on stage, from Music Makers, the Junior Concert to our wonderful Summer Concert, a huge ‘themed’ spectacle of music which showcases the talent for the year, with recent musical offerings as diverse as The Arrival of the Queen of Sheba, to Bohemian Rhapsody and an incredible medley from Les Misérables.

The successful launch of Radio Winterfold by Heart FM’ Ed James has provided us with a window and opening to the world. Through podcasts, streaming and recording sessions, we will be sharing the achievements of Winterfold musicians, both past and present, over the airwaves and on the Internet.  Recent VIP guests interviewed by our pupils have included former BBC Countryfile Presenter Michael Collie, GB Olympic Gymnast Kristian Thomas and Jack Rutter, former Captain of the GB Paralympic cerebral palsy football. Thanks to the Friends of Winterfold who helped to fund the project, we now have a hugely exciting resource which will grow over time.

You can find the Winterfold Music Department on the various Social Media channels below – and don’t forget to check out our unique music shop.

The Groove Diggers travelled to the metropolitan hub that is Halesowen to make a recording at Life Central Church. The group had a day laying down tracks with their sound engineers and professional sound rig. The sound system in the church is akin to something at the LG arena and the children fed off the energy and quality of the music.  Here is the result:

The Winterfold House School Music Shop is unique as the only in-house music shop in the country.

We sell second hand music, instruments and music accessories and are also a hub for information about what is happening musically at the school.

Please be aware that the shop is staffed by parent volunteers.

Donations of unwanted music would be very welcome for our Music Shop. Also, don’t forget to check our stock before you buy any new music or instruments.

If you would like to donate any musical items, please contact the School Office or pop into our Music Shop when you are next at Winterfold.