On Tuesday 21st June 2021, Year 8 performed  ‘School of Rock’ in front of a small but very enthusiastic audience. Due to ongoing restrictions, the children were not able to perform to their parents as hoped. However, Year 7 and accompanying staff took on the role of a supportive audience with great gusto!

It was back in June 2020 that I decided to choose ‘School of Rock’ as the Senior Play for this year. We have such talented Year 7s and 8s that I knew that together, we could make it a hit. Initial read-throughs went well but then the lockdown at the beginning of this year meant that we were forced back online. Rehearsing a show via Zoom is challenging but the children always gave the rehearsals lots of energy and rehearsed with enthusiasm. Sadly, it became clear that we couldn’t use Year 7 in the show because of the ‘bubbles’ situation, so Year 8 and I continued without them.

In April of this year, the show really started to come together. Mrs Richardson took on the role of Musical Director and soon even our most reluctant singers were singing loudly and with passion. Miss Roberts worked her miracles on the set, turning the streets of ‘My Fair Lady’ into the smart classroom and office at Horace Green Prep School. Year 8s learned lines well, developed characters with depth and were generally brilliant throughout. Not only were they actors, they were stage managers as they were responsible for moving their own props and set into place.

The final show was a slick, high-energy piece where the students of Year 8 showed just what a talented bunch they are. For me, the best moments were when the stage was packed with every Year 8 acting, singing and having fun. Thanks to Mr Loughton and Mr Mitchell (and their technical expertise) the show was recorded and played to parents via Zoom on Wednesday 30th June, so the children did get to share their performance with their parents in the end.

One of our favourite songs from the show is entitled “If Only You Would Listen”; well Year 8, you certainly got our attention with your performance and made us listen! Congratulations. 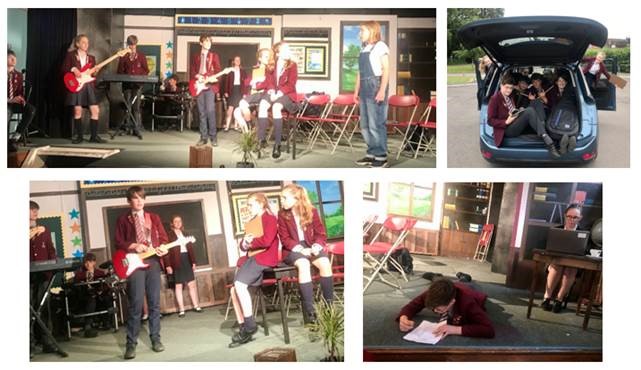