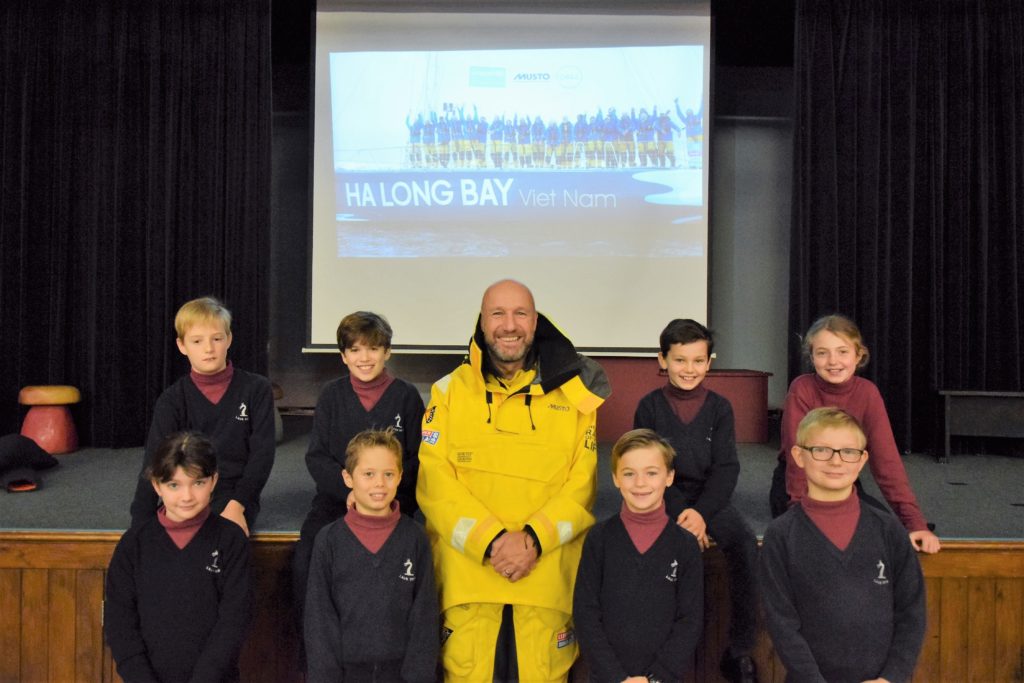 Pupils and staff were thoroughly inspired by a talk given in assembly on Monday 18th November by Mr George Blakeway, father of Jack and Harry, who was recently a member of the Ha Long Bay Viet Nam, Clipper Round the World Yacht Race team.

Mr Blakeway spent 30 days in the race and sailed the Portugal to Uruguay leg.  The pupils were enthralled by the presentation, where they learned about the tough conditions often experienced at sea, particularly with a 30/40 degree tilt of the yacht and a fast speed the equivalent of 29.7 mph.

The children were intrigued by the fact that there was no shower on board and for a month, they used sea water to keep clean.  The team of twenty-one people worked four hours on, four hours off, with half of the team on deck racing the boat, with the other half either sleeping or eating.

Despite the hard work and being constantly wet, the team loved the various forms of sea life they encountered, from the 150 dolphins at one stage that were swimming under and around the boat, to whales, sea turtles, albatross and even the birds that would stop to rest for a few days en route to their final destination.

Commenting on his experience, Mr Blakeway said “the best part was spending time with the team on the yacht, albeit sometimes in difficult conditions. We are now friends for life”.

Towards the end of the race, team Ha Long Bay Viet Nam knew they were in line for third place but when they passed through the Doldrums, the wind dropped completely. All they could do was wait, as their competitors began to catch them. Finally, the wind picked up and they made it to third place and a place on the podium.

At the end of the talk, the children enjoyed a Q and A session, with questions ranging from “did the team get sea sick,” to “can fish really fly”.

Mr Blakeway’s final words – “Be curious and find your own adventure” were an excellent way to sum up an inspirational talk for the children.